Organic solar cells, OSCs, have been a rising star in the field of renewable energy since the introduction of the bulk heterojunction, BHJ, in 1992. Recent advances have pushed the efficiencies of OSCs to over 13%, an impressive accomplishment via collaborative efforts in rational materials design and synthesis, careful device engineering, and fundamental understanding of device physics.

Throughout these endeavors, several design principles for the conjugated donor polymers used in such solar cells have emerged, including optimizing the conjugated backbone with judicious selection of building blocks, side-chain engineering, and substituents. Among all of the substituents, fluorine is probably the most popular one; improved device characteristics with fluorination have frequently been reported for a wide range of conjugated polymers, in particular, donor–acceptor (D–A)-type polymers.

Published in Accounts of Chemical Research, researchers in the You Group examine the effect of fluorination on the device performance of solar cells as a function of the position of fluorination, on the acceptor unit or on the donor unit, aiming to outline a clear understanding of the benefits of this curious substituent.

Finally, while the article focuses on studies in which the polymer is paired with fullerene derivatives as the electron accepting materials, non-fullerene acceptors, NFAs, are quickly becoming key players in the field of OSCs. The effect of fluorination of the polymers on the device performance may be different when NFAs are used as the electron-accepting materials, which remains to be investigated. However, the design of fluorinated polymers may provide guidelines for the design of more efficient NFAs. Indeed, the current highest-performing OSC, ~13%, features fluorination on both the donor polymer and the non-fullerene acceptor. 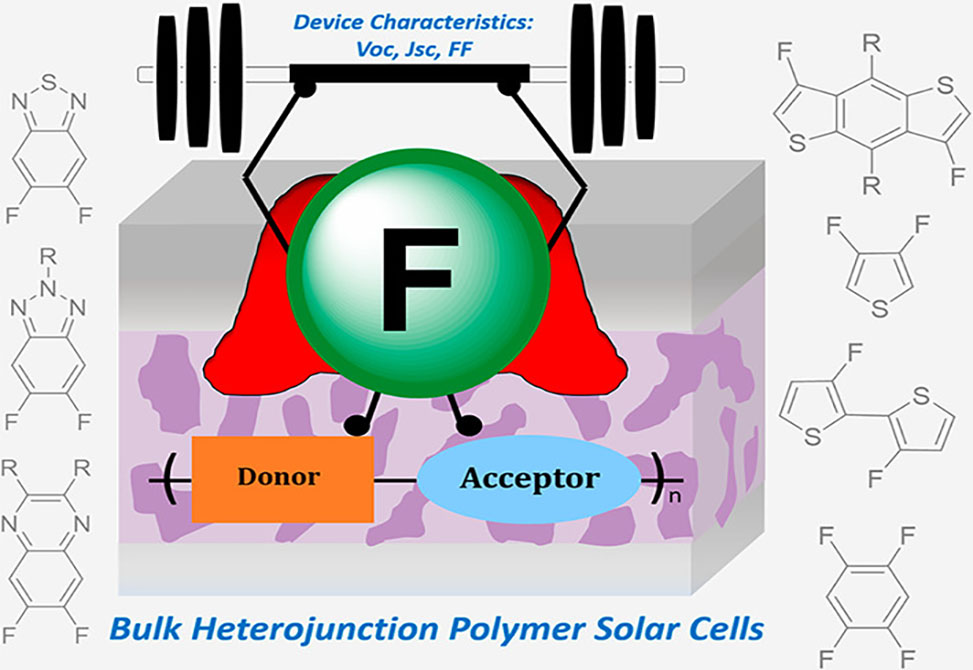