Professor Jinsong Huang Among 2020 Highly Cited Researchers, According to Web of Science

Out of nearly 8M researchers in the world over the last decade, less than 1% have published multiple papers frequently cited by their peers that rank in the top 1% of citations for field and year. Since 2001, our experts have used Web of Science™ citation data to identify these very influential researchers. Web of Sciences recognizes Professor Jinsong Huang as a Highly Cited Researcher for 2020 in both Materials Science and Chemistry. 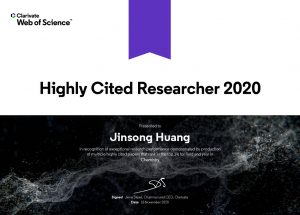