The ionic defects at the surfaces and grain boundaries of organic–inorganic halide perovskite films are detrimental to both the efficiency and stability of perovskite solar cells. In an article published in Nature Energy, researchers in the Huang Group show that quaternary ammonium halides can effectively passivate ionic defects in several different types of hybrid perovskite with their negative- and positive-charged components.

In summary, the group members have demonstrated that the passivation of ionic defects in organic–inorganic halide perovskite, OIHP, semiconductors by quaternary ammonium halides, QAHs, is a general passivation approach to remarkably improve the efficiency and stability of OIHP solar cells. This strategy could lead to further increasing the power conversion efficiencies, PCE, of perovskite solar cells by passivating both types of charged ionic defect in OIHPs.

There is still room to further improve the passivation effect, as indicated by the photoluminescence lifetime of the perovskite films, which still have not reached that of the single crystals. Further understanding of the nature of the surface defects in polycrystalline OIHPs, including the defect type, defect concentration and defect distribution, will be very important to guide the design of next-generation passivation molecules to fully passivate all of the defects. The Huang Group scientists anticipate that the precision defect healing will be an important direction to improve the efficiency of perovskite solar cells to the theoretical limit, as well as to stabilize perovskite-based materials and devices. 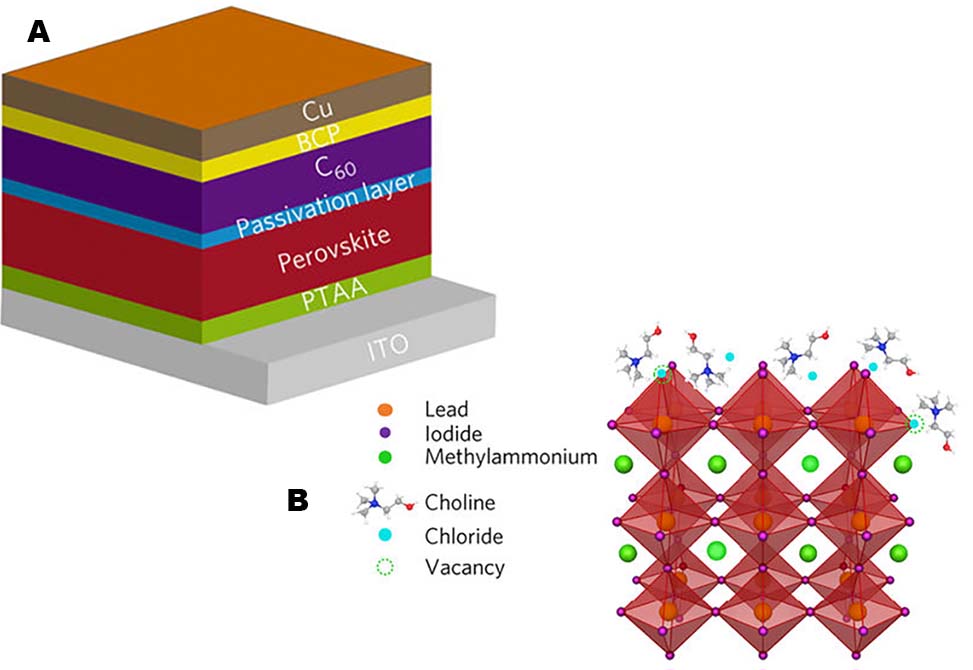 A) The device structure of perovskite planar heterojunction solar cells.
B) Schematic illustration of quaternary ammonium halides, QAHs, assembled on the defect sites.
The red and blue symbols represent the N atom and O atom of the choline chloride molecule, respectively.