Greg Forest and an interdisciplinary team of collaborators consisting of Jay Newby and Ian Seim from applied mathematics at UNC, Martin Lysy and Yun Ling from Statistics at U. of Waterloo, and Sam Lai and Justin Huckaby from the Eshelman School of Pharmacy, are studying technological strategies to estimate and control diffusive passage times through the mucus barrier in mucosal drug delivery. Their paper appeared in Advanced Drug Delivery Reviews.

In mucosal drug delivery, two design goals are desirable: 1) insure drug passage through the mucosal barrier to the epithelium prior to drug removal from the respective organ via mucus clearance; and 2) design carrier particles to achieve a prescribed arrival time and drug uptake schedule at the epithelium. Both goals are achievable if one can control “one-sided” diffusive passage times of drug carrier particles: from deposition at the mucus interface, through the mucosal barrier, to the epithelium. The passage time distribution must be, with high confidence, shorter than the timescales of mucus clearance in order to maximize drug uptake.

For 100 nm and smaller drug-loaded nanoparticulates, as well as pure drug powders or drug solutions, diffusion is “normal”, i.e., Brownian motion and rapid relative to larger particles, easily passing through the mucosal barrier prior to clearance. Major challenges in quantitative control over mucosal drug delivery lie with larger drug-loaded nanoparticulates that are comparable to or larger than the pores within the mucus gel network, for which diffusion is not governed by simple Brownian motion and typically much less rapid. In these scenarios, a timescale competition ensues between particle passage through the mucus barrier and mucus clearance from the organ. In the lung, as a primary example, coordinated cilia and air drag continuously transport mucus toward the trachea, where mucus and trapped cargo are swallowed into the digestive tract. Mucus clearance times in lung airways range from minutes to hours or significantly longer depending on deposition in the upper, middle, lower airways and on lung health, giving a wide time window for drug-loaded particle design to achieve controlled delivery to the epithelium.

In this article, the Forest-led team reviews the physical and chemical factors, of both particles and mucus, that dictate particle diffusion in mucus, and the technological strategies, theoretical and experimental, required to achieve the design goals. First they describe an idealized scenario — a homogeneous viscous fluid of uniform depth with a particle undergoing passive normal diffusion — where the theory of Brownian motion affords the ability to rigorously specify particle size distributions to meet a prescribed, one-sided, diffusive passage time distribution. Furthermore, the review describes how the theory of Brownian motion provides the scaling of one-sided diffusive passage times with respect to mucus viscosity and layer depth, and under reasonable caveats, one can also prescribe passage time scaling due to heterogeneity in viscosity and layer depth. Small-molecule drugs and muco-inert, drug-loaded carrier particles 100 nm and smaller fall into this class of rigorously controllable passage times for drug delivery.

Second they describe the prevalent scenarios in which drug-loaded carrier particles 200 nm and larger in mucus violate simple Brownian motion, instead exhibiting anomalous, transient, sub-diffusion, for which all theoretical control over diffusive passage times is lost, and experiments are prohibitive if not impossible to measure one-sided passage times. They then discuss strategies to overcome these roadblocks, requiring new particle-tracking experiments and emerging advances in theory and computation of anomalous, transient, sub-diffusive processes that are necessary to predict and control one-sided particle passage times from deposition at the mucosal interface to epithelial uptake. 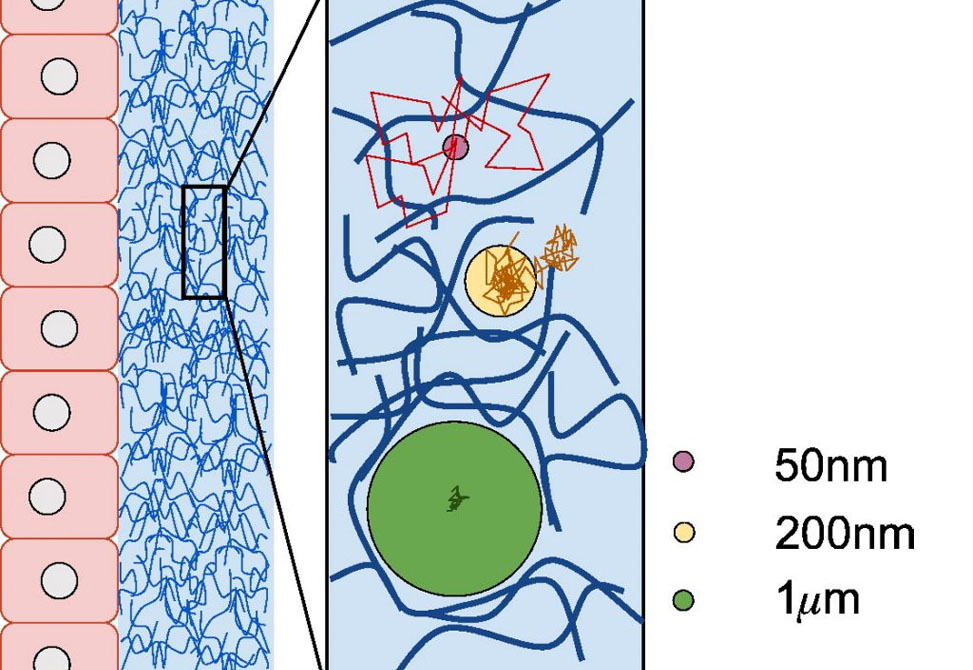