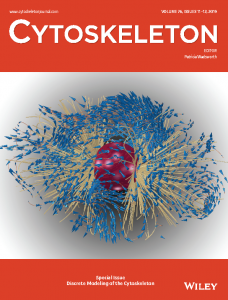 Nazockdast article on cover of Cytoskeleton

APS Professor Ehssan Nazockdast’s article, Hydrodynamic interactions of filaments polymerizing against obstacles, was selected as the December 2019 cover for the scientific journal, Cytoskeleton.

Abstract
Polymerization and depolymerization of cytoskeletal filaments against cellular structures can generate forces that are key to many cellular processes, such as cell motility and chromosomes movements during cell division. Motions generated by these forces induce global cytoplasmic flows and couple the dynamics of the polymerizing filaments and other bodies immersed in the fluid through their long-range hydrodynamic interactions (HIs). Previous theoretical and computational studies have largely ignored HIs. We use three dimensional discrete simulations to study the relationship between polymerization forces and their resulting flows and HIs. As a model system, we choose a filament that is polymerizing against an obstacle, and is embedded in a cylindrical array of parallel filaments of the same length. We consider three distinct mechanical scenarios for the filaments within the array: (a) all of the filaments are polymerizing with the same velocity; (b) they are all fixed in space, and (c) they are freely suspended. We show that each of these conditions produce their unique cytoplasmic flows and each result in differentiable polymerization forces and velocities. We also study the effect of buckling of filaments on polymerization forces and velocities and discuss the effect of HIs on the onset of buckling transition. Finally, we show that HIs result in the bundling of the buckled filaments within the array.

Visit the Nazockdast Lab website to learn more about their work.