Scientists have been searching for ways to develop materials that are as dynamic as living things, with the ability to change shape, move, and change properties reversibly.

Now, with nature as their inspiration, Northwestern University scientists have developed soft materials that autonomously self-assemble into molecular superstructures and remarkably disassemble on demand, changing the properties of materials and opening the door for novel materials in applications ranging from sensors and robotics to new drug delivery systems and tools for tissue regeneration.

The highly dynamic new materials form hydrogels and have also provided unexpected biological clues about the brain micro-environment after injury or disease when their superstructures revealed reversible phenotypes in brain cells characteristic of injured or healthy brain tissue.

“We are used to thinking of materials as having a static set of properties,” said Samuel I. Stupp, co-corresponding author of the paper. “We’ve demonstrated that we can create highly dynamic synthetic materials that can transform themselves by forming superstructures, and can do so reversibly on demand, which is a real breakthrough with profound implications.”

To create the material, Stupp and his postdoctoral fellow Ronit Freeman, now an associate professor in the department of Applied Physical Sciences in the College of Arts & Sciences at the University of North Carolina, Chapel Hill, developed some molecules composed of peptides (compounds of amino acids) and others composed of peptides and DNA. When placed together, these two types of molecules co-assembled to form water-soluble nanoscale filaments.

When filaments containing complementary DNA sequences that could form double helices were mixed, the DNA-containing molecules designed to create double helices “jumped out” of their filaments to organize the unique complex superstructures, leaving behind the molecules without DNA to form simple filaments.

The DNA superstructures, containing millions of molecules, looked like twisted bundles of filaments that reached dimensions on the order of microns in both length and width. The resulting material was initially a soft hydrogel, which became mechanically stiffer as the superstructures formed. The structures were hierarchical — meaning they contained ordered structures at different size scales. Nature does this very well — bone, muscle, and wood are hierarchical materials — but such structures have been very difficult to achieve in synthetic materials.

Even better, the researchers found that when they added a simple DNA molecule that could disrupt the double helices interconnecting filaments in the superstructures, the bundles came undone, and the material returned to its simple initial structure and softer state. Another type of molecule could be then be used to reform the stiffer materials containing superstructures. That sort of reversibility had never before been achieved.

To better understand how this process worked, Stupp connected with Luijten, a computational materials scientist. Luijten, with his graduate student Ming Han, developed simulations that helped explain the mechanics behind how and why the bundles formed and twisted. In such simulations, Han and Luijten could examine how each part of the designed molecules could govern the creation of the superstructures. After extensive computation — each calculation took weeks on Northwestern’s Quest supercomputer — they found that the molecules did not need DNA to bundle together, but could be formed in principle by many other pairs of molecules with chemical structures that interact strongly with each other.

“Based upon our understanding of the mechanism, we predicted that just positive and negative charges on the surface of the filaments would be sufficient,” Luijten said. That meant such superstructures could be created without the presence of DNA, in a completely synthetic material.

Stupp and his lab members then created the same material using only peptides instead of DNA. When the researchers used peptides with opposite charges in a specific architecture that mimics DNA complementarity, they found that they self-assembled into superstructures that were also reversible when the charges were neutralized.

The potential uses for these materials expand into medicine and beyond. A complex therapy with proteins, antibodies, drugs, even genes could be stored in the superstructures and released into the body on demand as the hierarchical structures disappear. Scientists could also search for new materials in which the reversible superstructures lead to changes in electronic, optical or mechanical properties, or even color and light emission, Stupp said.

“Now that we know this is possible, other scientists can use their imagination and design new molecules in search of these new ‘dynamic’ materials that reorganize internally on demand to change properties,” he said.

The new materials also led the researchers to a biological discovery. They took astrocytes — cells in the brain and spinal cord associated with neurons — and placed them on the new materials. Astrocytes are important because when the brain or the spinal cord are injured or diseased, they acquire a specific shape known as the “reactive phenotype” and produce scars that are dense fibrous networks. In the healthy brain, astrocytes have a “naïve phenotype” and a different shape.

Interestingly, when the researchers placed astrocytes on the material with only simple filaments, the astrocytes had a naïve phenotype, but when the superstructures formed they became reactive. They then reverted back to the naïve phenotype when the hierarchical structure disassembled. This discovery linked the architecture of the cell’s microenvironment to these critical changes of phenotype in injury and disease of the central nervous system.

Biologists recently discovered that it was possible to revert these reactive astrocytes to their naïve state by transplanting them into healthy subjects who do not have injuries, but Stupp and his collaborators found the new material triggers these phenotype transformations in brain cells.

“The cell responded to the structure of the material in its environment,” Stupp said. “It gives us new ideas on how to undo the scars in injured or diseased brain and spinal cord.”

The experimental work was funded primarily by the US Department of Energy and the computational work by the National Science Foundation and the National Institutes of Health. Biological experiments were funded by the Louis A. Simpson and Kimberly K. Querrey Center for Regenerative Nanomedicine at Northwestern’s Simpson Querrey Institute. The paper is titled, “Reversible Self-Assembly of Superstructured Networks.” 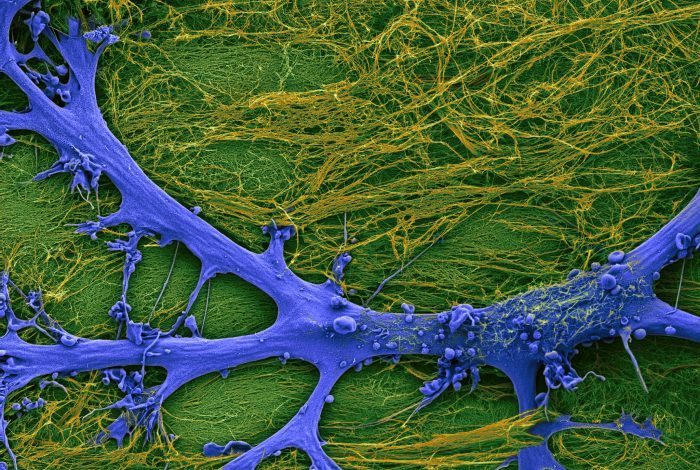