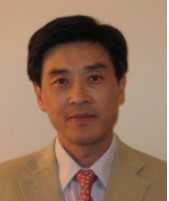 
Research Interest:
Water and gas configuration at a nanometric level

Yue WU was born in Beijing, November 1959. He began his undergraduate education at Peking University in 1978 and in 1979, he moved to Belgium to study at the University of Leuven (KU Leuven) majoring in physics and received his B.S. degree in July of 1983. He then went on to obtain a Ph.D. degree in physics in December of 1987 at KU Leuven under the supervision of Professor Andre Stesmans. Between 1988 and 1991, he was a postdoctoral research associate with Professor Alex Pines at the Department of Chemistry of the University of California, Berkeley. In 1991, Yue Wu started as an assistant professor in the Department of Physics and Astronomy, the University of North Carolina at Chapel Hill, and was promoted in 1998 to associate professor, and then professor in 2003. He is currently a Kenan Distinguished Professor at UNC. Yue Wu is a member of APS, MRS, and AAAS and is an elected fellow of the American Physical Society.