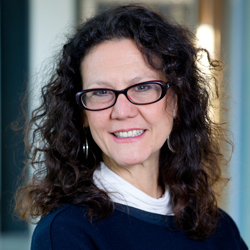 Join us for another event in the 2018-2019 Colloquium Series as APS welcomes Monica Olvera de la Cruz, PhD. to present on her recent research. Dr. Olvera de la Cruz is currently a Lawyer Taylor Professor of Materials Science and Engineering, Chemistry and, by courtesy, Chemical and Biological Engineering, Physics and Astronomy at Northwestern University. Her group is “centered around the development of models to describe the self-assembly of heterogeneous molecules including amphiphiles, copolymers and synthetic and biological polyelectrolytes, as well as the segregation and interface adsorption in multicomponent complex fluids.”

Abstract: Polyelectrolytes control the organization and properties of materials with important applications in nano- and bio-technology. For example, polyelectrolyte blends and copolymers, consisting of at least one charged species, are ideal candidate materials for fuel cell and battery membranes, as they combine the mechanical stability of the polymer chain with the ion-selective conductivity of the charged backbone. Specifically, using charged constituents in heterogeneous polymers, is a powerful way to control nanostructures. In this talk, we show examples that reveal the effect of local ionic correlations between the charged backbone and counterions on the statistics and thermodynamics of polymer electrolytes. In particular, we show that charged components enhance phase separation in ionomers, copolymers and melts even in the absence of chemical incompatibility between the polymers, leading to nanostructures that are highly desirable for transport but inaccessible in neutral systems.