The UNC KEEN Program partnered with the Office of Undergraduate Research Consultant Team program to offer a $1,500 student supplement for projects that foster curiosity, connections, and creating value. UNC recently featured one of the 2019-2020 awardees, who have launched a new drone hub, also known as Carolina’s Drone Lab, CARDNL. This hub will serve as the technical home for drone technologies used for research, education, and service.

In the recent proje 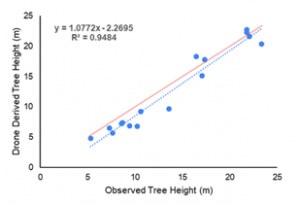 Their objective was to determine whether aerial imagery from drones could be analyzed with structure from motion software to obtain accurate estimates of tree height and diameter. The team found one site to be significantly correlated with known tree heights (p > 0.001; R2 = 0.95); however, they found the regression to be a poor fit on the team’s second and larger test site (p > 0.05; R2 = 0.003). They believe the mismatch occurred because the aerial imagery from the drones can only measure canopy trees, or there was an error in the model that was used to estimate the tree heights.